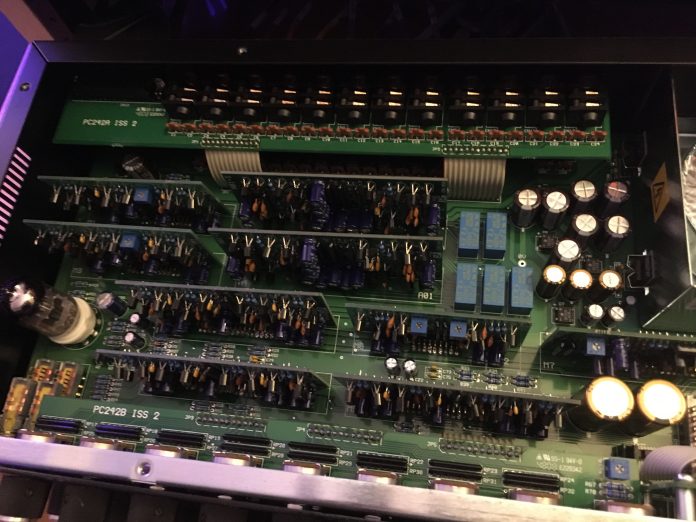 A few years ago I started seeing posts on the interwebs about how wonderful analog summing was. The concept being that more analog = more better. Like I previous wrote, people found, with the shift to digital, that they missed the non-linearities and harmonic character of analog equipment. It’s no wonder, of course. Genres that go back to the analog days have a particular sound to them and digital mixing, while it has progressed significantly, isn’t going to impart that flavor unless you use software that’s designed to impart that flavor. One of the many ways to impart an analog flavor is through analog summing. Summing is what we call blending the different audio sources together, adding (hence “summing”) the various values of a sound with the values of all the other sounds in order to create our stereo mixdown. In your computer this is done with math. In an analog board, this is done with electronic components, and like everything analog, it imparts its own unique sound. While there is software that replicates the sound of this summing, those of a gear persuasion will swear that no piece of code can replicate the real thing.

With all the passion I was reading, about how analog summing was the way to go to get professional sounding mixes, I jumped on board and bought myself a summing mixer. Summing mixers, at their core, are “make better boxes”. The simplest (and cheapest) ones may give you mono/stereo control over the inputs, but generally that’s it. You put signal in, and you get signal out, hopefully sounding “better” than if you just summed it all digitally. This is boring. Thankfully, I was able to find a box that gives me at least a few more options to play with. Ok, one option to play with, but it’s a big one.

The box I bought was the TL Audio Ebony Summer. TL Audio doesn’t exist anymore. They released a few pieces of tube gear, including a mid-format console, but none of their other stuff was particularly interesting, and as with all companies that no longer exist, you take the risk of not being able to properly service your unit. With that taken into account, I still went for their box. Why? Because it has a tube!!!

If analog has a reputation of making things sound better by default, tubes take the cake as far as the mythical “more better” sound. Tubes impart additional harmonic content, primarily even harmonics (your octaves), giving an often pleasant and musical richness to the sound. They’re known to add depth, width, warmth, and all sorts of other engineering adjectives that people desire. There aren’t a lot of summing mixers that are tube based, and I think there’s a reason for that. Tubes impart color, that’s why they’re desired, but you don’t always want color added to your sound. Especially with summing, it can easily get overwhelming and end up making your mix murky with all that richness. Like too much cake. Tubes are cake.

The wonderful thing about the Ebony summer, which I haven’t seen on any other tube summing mixer, is that the tube is optional. Yes, I can turn it off. It’s also variable drive, both in a separate knob, and in how much signal is going into the mixer, so I can blend the level to exactly what I want. While there are summing mixers that have variable harmonics, including tubey flavor, as far as I know they don’t have an actual tube. Which means I can’t do with them what is my favorite feature of having a tube in my summing mixer: switching out the tube!

It’s almost like this box is made for swapping tubes. It uses a single 12ax7 tube, which is easily removable. As each tube has its own, very unique sound, that means that not only do I have optional, variable harmonic content I can add, but I have a near endless variety of different sounds I can play with! Take that, more expensive things that only have 1-2 different sounds! Now, as I said above, I don’t always want the sound of the tube on the main mix. In fact, I keep the tube stage off for about 90% of the mixes I do. Without the tube you get a lot more clarity, as well as depth and three dimensionality with your summing. You know how people say tubes add depth? At least with summing they actually take that away. On this unit, even with the warmth knob all the way down, you still get about 1-4% THD at 0VU, which doesn’t sound like a lot but actually is a lot. When I do use the tube on my stereo mix, I end up coming in at around -6VU. At that level I get more clarity and openness, though a lot of the openness comes from being below 0VU in general, not the tube. When I do this it sounds a lot more vintage, which works for some songs, but in general I keep the tube off.

What I do use the tube for is for adding character to individual instruments. Tubes do sound good, after all, and I do want the character of them at times. I’ll run the bass through and add some gentle warmth and print that. Guitars with a different tube, maybe even vocals (generally not drums). Sometimes almost every element gets a tube, but different tubes, tailored to the individual element. Since I’m going for saturation, I can push things to really get that distortion and character and richness that you get from a real tube and that emulations kind of recreate, but haven’t quite gotten right yet. Certainly not with the unique options that come from various different types of tubes. Then, I run the whole mix through the box again, without the tube being on, and I get the sound that I want.

My summing mixer (sans tube) sounds like what I was promised. Open, more detail, more depth and width. Metaphorically, it’s like the difference between a high res picture of a painting (digital summing) and seeing the painting in real life (analog summing). You get a better sense for the colors and the brush strokes and especially the size. Like, did you know “The Persistence of Memory” is the size of a piece of paper? And that “Las Meninas” is freaking huge? That’s analog summing. Plus, you get to add in the character of your converters, which is a whole other article. My Antelope converters sound so good that if I didn’t have the summing mixer I’d probably still run signal through them, just to get their sound. And since different converters have different sounds, well, that’s more analog gear to play with.

Ultimately that’s what we’re after: a unique sound that we get from a combination of our specific gear. Everybody has access to the same software, and while you can (and often should) use that software like you’d use their analog counterparts, you’re still using the same software that everybody else is using. Who else is using a four year old Antelope interface with this particular discontinued summing box? I’ve even started customizing it, replacing the power board capacitors with hifi Nichicon ones. Does it effect the sound? Probably. Maybe not noticeably (I didn’t bother to print a comparison before I got it recapped), but it’s different parts, and each part imparts a sound, so yeah. No other summing box sounds like my summing box.

So let’s talk drawbacks. This is more a problem with it being an older piece of gear, but I have to calibrate my levels before using it. There’s a small variance between each input, so I have to adjust the levels going out to compensate. Otherwise, stuff that’s centered in the box will be shifted slightly to one side in the mixdown, and we can’t have that. Likewise, the tube stage imparts its own gain, so I can’t even do a proper A/B to see if I want to use the tube on a mix. The [Main] output volume is variable, with the max level adding 6dB of gain to the signal. There’s no dent for the gain neutral spot, so if I sneeze on it it’ll throw off my calibration, which is an issue, since I’m constantly messing with the thing to swap out the tubes. Unfortunately, it also adds a ground loop (which isn’t present once I stop adding gain, so it’s probably not part of my overall wiring). Is this something I could get fixed? Maybe, but that’ll cost money. I’ve already put a few hundred dollars into this thing, buying the fancy caps and getting it serviced (my hands are too shaky for electronic soldering). And there’s so many more caps to replace. By the time I get it fully serviced, I’ll probably have spent at least double what I paid for it initially, and definitely at the level of a new summing mixer, with variable harmonics. So what’s the point of keeping this thing going? Maybe the unique sound? Maybe sunk cost? What I know is that right now it works and it sounds good.

Should you get a summing mixer? Yes-ish. They’re expensive, and you have to take into account converters. Most summing mixers have sixteen inputs, and most rack interfaces top out at eight outputs, meaning you’ll spend a couple grand or more just to be able to use the thing, if you want good converters (even two new Scarlett 18i20s costs $1000). That’s a lot of money for a make better box, and the entry level ones are just that. What you get is a subjectively better sound, and often no more or less. Maybe you find a used Ebony summer, maybe you splurge and get one with extra stuff to play with. Maybe you say that your Slate Mixbus plugin is good enough, and save your money for more pressing things. Am I happy with my box, with all the drawbacks and cost sink? Yes. I love using a summing mixer, even with not being able to do an offline bounce, even with not being mobile with my mixing, even with the maintenance and the extra expense. I like the sound, it feels like my mixes are closer to being done than without, meaning my time is freed up for more creative work. Will you be happy with your own summing mixer? I think you will. If you can accept the drawbacks. But at least you don’t have to worry about recall sheets.

Update, 7/23/21:
I’m updating this because I’ve completely changed my mind on the tube. I bought a Telefunken tube, because Telefunken, and while I don’t like the distortion I absolutely love what it sounds like on the stereo bus! It does everything I was promised! Width and depth and detail and warmth and all that fun stuff. So, I guess when it comes to tubes, you really gotta make sure you’re using the right one.

Lilian Blair is a producer, engineer, and audio educator in the Seattle area. She specializes in studio recording, mixing, and helping artist achieve their musical dreams.