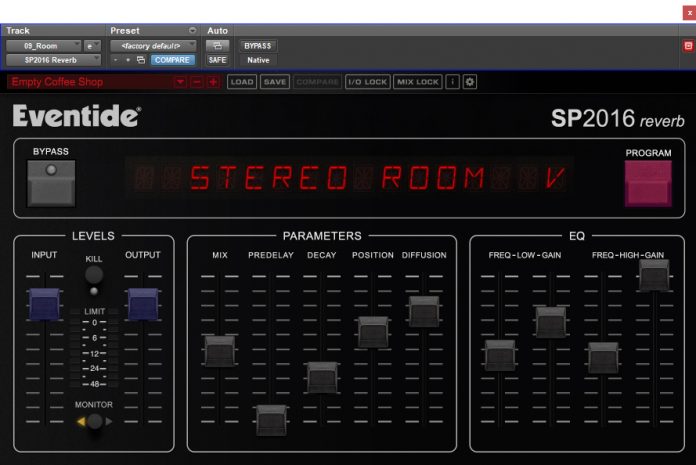 Eventide is one of the most respected names in pro audio. For more than 40 years they’ve made some of the most sought after and venerated effects processors in the industry. So, when they offered to give us access to their entire plugin library, I was shocked.

I’ve been playing around with the plugins for a while now and they are COMPLICATED! Well, some are. The ones that I won’t be talking about for a bit. I promise I’ll go through all of them, tell you what I think, and whether or not you should buy them, as honest as I am with everything. We’re gonna start with an easy one: the SP2016 reverb. The original 2016 is an effects processor from the 1980s, and one of the first to actually convert the signal into digital for its processing. The unit contained multiple different effects processes, as well as giving you the ability to create your own presets. Pretty cool for 1985. The SP2016 reverb plugin, though, is not a complete recreation of this unit. Rather it is a software emulation of the room and plate settings of the original unit. I’ll admit, skimming through the manual of the original unit I’m a bit disappointed that I don’t get the whole thing. It looks cool, and probably still has a lot of utility and uniqueness in its sound and operation that you can’t find in modern offerings. Yes, I have plugins that do everything the original 2016 can, but it’s not the same as having a full software recreation of a classic piece of hardware, meaning I’m disappointed before I even open the plugin. Not a good start for something so expensive. However, as soon as I did open the plugin, my opinion was completely changed.

We’re presented with an elegant interface reminiscent, though not an exact recreation, of its analog counterpart. The controls are relatively simple: input and output level; mix, predelay, decay, position, and diffusion; and a low and high gain eq section. A slightly less complicated D-Verb is my first impression of the interface, but also, surprisingly, far easier to use. Maybe it’s just the fader layout as opposed to pots, but I’m able to quickly, and I mean quickly, get things dialed into exactly where I want them to be. Maybe that’s just because the unit itself sounds so, so good. Compared to D-Verb, the algorithms have a much more realistic quality to them, which is fun, considering how old the sound they’re after is. Maybe I’ve just heard them on enough classic records to have that sound be recognizable to my brain, but to me it sounds like what a room should sound like. I can choke things up and get an approximation of the very tight room at The Vera Project, or I can loosen things up and get something more akin to London Bridge Studios, and even make it so crazy as to sound like I’m recording in an empty warehouse. I don’t have to futz with it to get it to sound real, or hope that I’m the only one who notices that it’s a facsimile. Being able to dial things in so quickly, and with a tone that makes me so happy is one of the big strengths of the plugin. I get near effortless creativity and that reduced stress and near automatic good tone keeps my mix moving forward quickly and sounding amazing.

Let’s go over how I get such a great sound. The above image is what I’ve put on a drum room track to make it sound not so bleh. I like putting reverbs on drum rooms, rather than on the close elements, because even if it’s a blasé room it’s still going to have roomy characteristics. The high end frequency content is going to have dropped off, there’s going to be less attack in the hits, we’re going to have some reflections coming in, etc. Adding a reverb to the room gives me a starting point that is accurate to the sound that I’m after, while the reverb allows me to customize that environment. In order to dial in the SP2016, I start with the mix at 100% and everything else at 0%. I’ll then move the Position fader until it gives me the tone I want. Position mimics the distance from the source that the reverb is being captured. Farther away and you’ll get not only a darker, boomier sound, but also more delay. That’s why the predelay gets to be 0. The farther away from the source you get, the more there’s a slap delay, which I’m guessing is just part of the algorithm. This gets smoothed out by the decay, which is what I set next. I’ll set this based on the vibe I want, as well as making sure things don’t get too muddy (so, like normal decay settings). After that I’ll go for the mix. Since I’m using it to augment one track, I’m not going to bother routing to an aux bus. Regardless of how I balance, though, this is the balance step. After that I make additional adjustments to get the tone I want. Because of the delay imparted by Position, I don’t need to touch Predelay, at least for a drum room, and Diffusion is so subtle I don’t think it really matters much where I put it (diffusion is subtle in general, but way more so with this that with, say, our handy Pro Tools stock reverb D-Verb). If you want more discernable echo, go for less diffusion. Finally, we get to the algorithm. Since I’m going for a room, I’m using our room algorithms. There are two versions: vintage and modern. Vintage, as the name implies, is a recreation of the original unit. Modern, as the name also implies, uses more current understandings of reverbs and their creation to create a more, um, “modern” sound. Vintage is darker and needs a longer decay to get the sound you’re after. Modern is brighter with a longer decay and more width. There’s also a choice between stereo and mono room. I’m using it on a mono source, and there’s very little difference between the two, but there is a tonal difference. Mono seems punchier and better emphasizes the snare. Because of the similarities in the algorithm, I’ll choose this last before making my final adjustments. Overall, it took way way longer to type all this than it did to dial things in. As I said, I can get a really good room tone in less than a minute, which I love.

Let’s give the plate algorithm a shot on vocals. For this one I am going to behave and use an aux send, meaning my Mix parameter will be set to 100%. Keeping the faders even, I’m going to load up first the vintage plate, because why not. The vintage plate disables most of the parameters. You don’t get to play around with distance or diffusion, so you’re stuck with the sound of the plate. Still, like the room, it sounds amazing. I’ll set the Decay so as not to muddy the vocals and give it some Predelay to give the vocals a little more clarity, and to add some nice echo. If I were sticking with the vintage plate I’d be done, but let’s play around with the modern plate. Modern plate, like the modern room, gives us a far brighter reverb, with a longer decay. The Position fader adds additional delay to the signal, as well as giving us a darker tone. The problem though, with picking our algorithm, is that Position is so vital towards getting the tone that losing it on vintage means you can’t really do an A/B like you can with the room. In that case, pick your algorithm first. I like modern for the options, but even with the extra options I can get things dialed in so quickly it amazes me. Even more quickly than reverbs with fewer controls! This is likely because it’s hard to get a bad sound out of this. Everything sounds great, so as long as you mix with intuition and avoid stressing over the details you’ll be fine. Here’s what I have for a vocal plate:

I’m keeping diffusion at 0% because I want more echo to it. Position is kind of half way (which sounds around where vintage is), with a Decay and Predelay to fit with the song. I also did a bit of EQ, cutting 6.5kHz and 150Hz to clean out some mud and some harshness, then blended it in and it, again, sounds amazing!

This is quickly becoming my favorite reverb which, for something that seems somewhat restrictive in its algorithms, is saying something. The amount of presets it comes with, arranged by type of spaces, instruments, and artist designed ones really speaks to the overall versatility of a few algorithms and controls. So should you buy? Well, after gushing over it, if you couldn’t guess, I’d say the answer is a resounding yes. If you can justify the price. Audio software ranges from “make it as affordable as possible” to “charge what higher level pros can pay.” At $250, with cheaper emulations available (like you get in the Slate bundle), to be honest I probably wouldn’t buy it myself. On the other hand, now that I’ve played around with it, I also probably would use it as my go-to first choice reverb on every mix. Is that quality and its ease of use worth the premium price tag? If yes, then this is a buy. If no, then wait to see if it goes on sale and buy then, because when the price is right for you, this plugin is absolutely worth it.

If you choose to buy, please do so using our affiliate link to help support the site!
Eventide SP2016 Reverb

Lilian Blair is a producer, engineer, and audio educator in the Seattle area. She specializes in studio recording, mixing, and helping artist achieve their musical dreams.
www.lilianblair.com